Celebrating A Birthday in Lockdown

It was Andy’s birthday on Friday and the day dawned beautifully sunny. As soon as he was out of the door to go to work, I set about making his favourite cake, a Victoria Sandwich, as a surprise for his birthday. I don’t think I’ve ever made a cake at 8am in my pyjamas before!:)) I have a standard sponge cake recipe that I have used for years, in fact, I think it was possibly my grandmother’s recipe:)). Once out of the oven, I had to leave the cake to cool, so made sure the kitchen door was closed, in case the cat decided he wanted cake for breakfast:)), while I went for my daily walk (we have to be back under curfew by 10am!). On my return,  I whisked up the cream and “sandwiched” the cakes together. I think it turned out ok, even if I do say so myself!!

Now, Andy has a standard routine when he gets in from work. He washes his hands as soon as he gets in, (the new norm in lockdown) then goes into the garage, opens the “spare” fridge and takes out a square of chocolate (naughty naughty Andy!). He has been doing this every day, without fail, since Lockdown began. So, to surprise him, I left the cake in the “spare” fridge so he would see it as soon as he went for his “chocolate fix”. However, when he gets in from work on his birthday –  the one day he deserves chocolate – he decides to be healthy and heads to the kitchen for a banana instead!!! He was very happy, however, when I did reveal the cake

To celebrate Andy’s birthday we treated ourselves to our first takeaway in Lockdown. We decided to have ribs from Caucho Voy in Manilva village. We have eaten there several times and the food has always been very tasty. It was so nice not to have to cook (although, having said that, Lockdown has made me enjoy cooking and experimenting with food again).  Barbecue ribs and home made chips washed down with a bottle of “nice ” wine that I had been saving (and not my standard 3€ a bottle wine from Mercadona – which is actually quite nice!) went down very well.

The weather on Saturday was not as nice as Friday but it was pleasant enough and still quite warm. I had found a big box of paperwork so I decided to take it out onto the terrace and sort it, whilst sitting in the sun. I must admit, I am a bit of a hoarder – my motto is “well, you never know when you might need it” whereas, Andy’s motto is “just throw it out!” – but even I don’t think I need to keep water and electric bills from 2009!! After an hour or so, said big box had been reduced to a few small folders and a large bag of paper to go into the recycling bim – Job well done!!

As we’d uncovered the barbecue, we decided to make use of it (before the rain arrived again!) and we cooked a delicious spit roast chicken for dinner. I say “We” but the barbecue is definitely Andy’s domain. All I did was prepare the salad!!

The rain arrived with a vengeance on Sunday – it was absolutely throwing it down in the morning so I decided I didn’t need to walk in that! I had a very lazy Sunday – actually my first since lockdown – I’m usually trying to find something to do. I spent the day in my pyjamas and watched a whole series on the TV. Bliss!!

I know you are all waiting for the update but Project bedroom is, yet again, on hold!! We are waiting for the wallpaper to arrive. I ordered it online mid April and it was scheduled to arrive the first week of May but it has been delayed…and now will arrive sometime before mid June!! I am tracking it everyday but still no news!! We are now ready to paint but we want to match the paint to the wallpaper so have to wait for it to arrive in case the colour differs from what it looks like on the website. Oh well, I’m sure Andy will find another project to be getting on with.

Mum has finished another jigsaw – this is her 6th – I think!! It’s called Chocolate cup cakes. When she sent the picture to me I thought she had been baking:))) 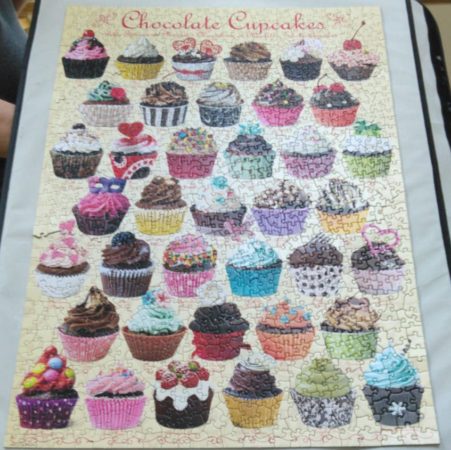