The big news from last week is that Malaga province will pass into phase 3 of Lockdown de-escalation as from Monday 8th. It was a bit unexpected as we had only spent one week in phase 2 but very welcome news. And even bigger news… we can cross provinces within Andalucia!. This means my son can come home to visit us …hooray!! I can’t wait to see him. He’s said he’s coming back on Sunday for a few days but I have my suspicions that he’s planning to surprise me and come back earlier. Whenever he comes, I’ll be so pleased to see him and just can’t wait to give him a huge hug!!!

I went for my first walk along the promenade last week. Manilva village is lovely and as mentioned before, I’ve discovered parts of the village I’d not seen before but it is very hilly and I fancied a long “flat” walk. So, I got in the car and drove down to Sabinillas. It is normally quite difficult to park in Sabinillas but there were loads of free spaces this time. I’d gone early as I didn’t want it to be too busy, that way I could walk without having to wear a mask. My gosh, it was just wonderful. The sun was just beginning to get warm, the sea was like a millpond and the paseo was almost empty.

I walked all the way from La Noria IV  in Sabinillas to Castillo and back again. I could have done more but time was getting on. This is definitely going to be repeated at least once a week if not more.

More big news.. Our wallpaper has arrived….Finally!! Well, there is a story to this. I’d been tracking it on a daily basis and last week I noticed that there was another part in the tracking section. When I opened this, there was another tracking number which said the package had been delivered the day before. Isn’t it just typical – that day was the first day in 11 weeks that I’d been out of the house for more than an hour and that’s the day they deliver. I must have missed the delivery by about 10 minutes!!

The first thing I did was to check our postbox as normally the postman will leave a slip so you can collect your package from the post office..but no slip! So, armed with the tracking number and my address written down, I went to the local post office in Manilva the next morning. The first thing the lady said to me was “ have you checked your postbox!” Really!!! In fairness, she was very helpful. She called the Sabinillas office and after a few minutes said that it was in the office in Sabinillas and I could collect it that day or wait until Monday and she would bring it up to Manilva for me. I said I would collect it from Sabinillas so I jumped in the car and drive down the hill. Only 2 people are allowed in the post office at a time so a “socially distanced” queue had formed outside. Pre Lockdown everyone would “take a number” and wait inside generally huffing and puffing about the time it was taking but this morning, everyone seemed in good spirits and accepted that we needed to wait. 25 minutes later, I entered the post office. I explained to the lady that her colleague had called from Manilva and I had a parcel to collect. She took the tracking number from me, ran it through her system, and promptly said ” it was delivered yesterday! – The phrase “Computer says No!” sprung to mind:)). I calmly explained again that I hadn’t received it and that her colleague in Manilva had confirmed that it was here in Sabinillas, at which point she said “oh, it not here, you have to go to the office next door, ring the bell and they will give it to you” GRRRR – why didn’t the lady in Manilva tell me that – I’d just queued for 25 minutes!! OK, Calm down Debbie – it’s all good:)). I went next door. There was a man standing there about to drop the shutter. I told him I had a parcel to collect and gave him the piece of paper with the tracking number and my address on it. He glanced at it, went out the back and returned with my package – Success – but oh what disappointment – only 1 roll of wallpaper!!

We had ordered 2 and the company must have sent them separately – hence 2 parts to the tracking section!! Oh well, at least we can now choose the paint! The good news is the other roll is supposedly now in the local office and should be delivered at some point today – fingers crossed!

On Saturday, we treated ourselves to a Fish and chip takeaway from JJ’s in Duquesa. I had whatsapped my order to them a few hours earlier and it was all ready for us to collect at our chosen time. Very efficient service and delicious fish and chips – so good, in fact, we had eaten most of it before I remembered I was going to take a photo:))

Sunday bought yet another round of the family quiz. My brother came up with a “dad jokes” round where he said the joke and we had to guess the punchline. It was hilarious. I think mum is enjoying the quizes – she’d prepared 2 lots of general knowledge questions and has already prepared her questions for the next quiz – we haven’t even confirmed another quiz yet!! 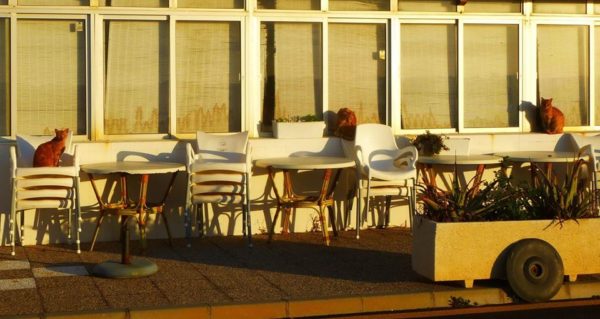 It made me smile. My cats have got it sussed too:))

Well, you already know that we have one roll of wallpaper so armed with a very small piece of it we headed down to Ortegas (builders merchants) to buy the paint for the doors and the skirting. Andy had originally wanted to paint the doors white but I’d decided I didn’t want white so we had settled on a light grey. We chose the colour we wanted and also bought some primer – Andy says it’s like an undercoat when painting wood – if you say so Andy:). So by Saturday, Andy had the first coat of primer (it was a white colour) on the doors and 2 coats on the skirting. On Sunday he headed upstairs to put the final coat of primer on the doors and paint the skirting with the grey paint we had bought. After a few hours he called me upstairs. “What do you think?” he asked. Well, I was hoping my silence would say it all- I really didn’t like the grey colour!! “You don’t like it do you” said Andy. I gingerly shook my head expecting him to sigh in despair when he said “thank god for that – I don’t like it either!”:)) It was much darker than we’d expected – hardly the soft grey we’d wanted, more an industrial battleship grey!! Thankfully we’d only bought a small tin so no major harm done.

Having decided we didn’t like the grey skirting, I turned my attention to the doors which were now painted white from the primer.

“Actually,” I said ” I quite like the white doors” This time Andy did sigh in despair.. but I think he was secretly happy that he got his way in the end. So, having had our colour scheme planned since the beginning of Lockdown, it’s now all changed:))

Mum has completed yet another one. This is called “Festive Skaters”

My brother has now taken to borrowing jigsaws from his neighbours to keep mum stocked:))