Here in Manilva, we have been in phase 1 of lockdown de-escalation for just over a week. Some people are embracing it and heading out to the bars and restaurants whereas others are a little more cautious and do not yet want to venture out. Each to their own – Lockdown has affected us all in different ways and we will all react to our new found freedom differently. I like to think that I am somewhere in between – I’m happy to be allowed out but have also got quite used to “my four walls” I hadn’t ventured out all week (apart from the supermarket run but I had been doing that anyway) but we had a few things to do so Andy and I went down to Sabinillas on Saturday morning. Our plan was to run our errands then head to the promenade and grab a coffee (First coffee out for 9 weeks!). We left home early, around 9.30, assuming by 10.30 we’d be enjoying our coffee. What I hadn’t factored in was in the “new normal” everything takes 3 times as long. Quite rightly, shops are only allowing a certain number of people in at a time and you need to wait your turn. Also, many businesses are open for fewer hours than before and have less staff working at the moment so things are obviously taking longer. Despite this, we were met with smiles and great service in every place we went into – some even apologised for the wait – It’s not their fault!! By the time we’d got all our tasks done, it was almost 12.00 and we were both starving so, instead of heading for coffee, we headed to the bakery and bought freshly baked croissants instead. Filled with cheese and ham, they made a great brunch! – but I still haven’t had my first coffee out yet!!

The weather has been beautiful – dare I say that summer has arrived. I feel we have missed Spring this year though. The skies seem clearer – and the sun feels stronger – and there seems to be much more wildlife around- The birds have been very vocal over the past few weeks although I’m not sure if they are making more noise than normal or it’s just that we have never noticed it before with all the other noises around in the general hubbub of life.  I do hope that we do not undo the good we have done with regard to the environment when we are out of lockdown.

We put the barbecue to use again on Saturday – Andy made Ribs!!. Just as I am known for my brownies, Andy is known for his barbecue ribs. They are marinated overnight then cooked for around 4 hours. It takes time but oh my god…so worth it!! 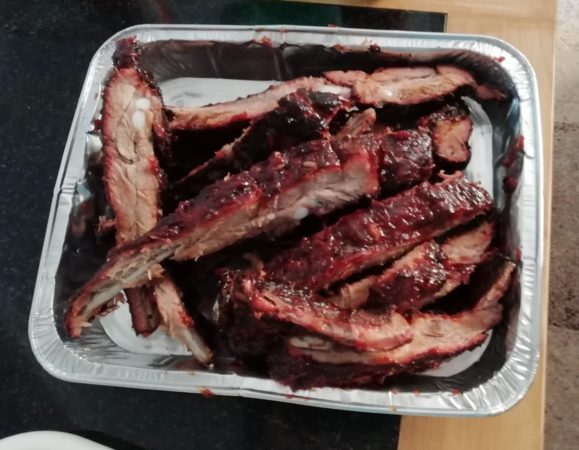 His mates were not impressed when he sent them photos – I feel we will be hosting a BBQ in the near future!!

On Sunday morning we heard the church bells for the first time since lockdown started. Up until now the churches have been shut but, now, in phase 1, they can open and hold masses with 30% capacity. Every Sunday, the bells would ring at 10.30, 11.00 and 11.30. It’s strange – I don’t remember noticing that the bells weren’t ringing on Sundays (maybe because the weather was so bad, the windows were shut) but I definitely noticed that they were ringing this Sunday! It was a lovely sound to hear and made me realise that we are coming through this situation – We can actually see the bell swinging in the tower from our roof terrace.

I have a rule once summer arrives – if a meal takes longer than 30 minutes to cook in the oven, we don’t have it. It’s generally too hot to have the oven on longer than that!. With that in mind, and I fancied something different so I dug out my recipe book and ended up making stuffed peppers – delicious – and actually dead easy to make – will be making them again!

Sunday evening bought another round of “Family quiz”. Great fun again. I think my favourite round was the “Movie Quotes” round that my brother had devised. He had 10 well know quotes from movies and we had to name the film, the character who said the quote and the actor / actress who played them. It was amazing how difficult it was to get all three for each film!

Mum has now completed her 10th jigsaw!! This one is called “Beefeaters at the Tower of London”. Apparently, she has another two lined up to do…then I think we might need to find her another hobby :)))

Project Bedroom update – Fingers crossed, the wallpaper will arrive this week!! It’s left the Netherlands and is on it’s way to Spain!!! To say Andy is chomping at the bit to get the bedroom finished is an understatement!!