At around 7.30pm last Friday, the eagerly awaited announcement arrived – Malaga province would pass to phase 1 of lockdown de-escalation as from Monday. This means we can visit family and friends (up to 10 people) within the Malaga province, bars and restaurants can open for service on their terraces with 50% capacity….and Andrew can get back to doing viewings!!

Unfortunately, for myself and Shani, we still cannot see our families (Shani’s mum and my son) as they are living in the Cadiz province. It seems strange to me that we can travel to Nerja, an hour and a half away, but still in Malaga, yet we can’t travel to Sotogrande, 10 minutes away, because it comes under the Cadiz province. I know they have to put in a boundary somewhere and it makes perfect sense that it is the provinces but still disappointing. Oh well, let’s focus on the positives – I can now travel to Estepona to get my hair cut!!

A few weeks ago, Andy and I “gatecrashed” our friend’s family quiz. It was such good fun that I organised one for my family. There was Andy and I in Manilva, my daughter in Madrid, my son in Medina Sidonia (Cadiz), my parents at their house in the UK and my brother, sister in law and two nieces also in the UK. We all joined together via Facebook messenger video call which worked well. So that we could all ask and answer questions, we had each chosen a different subject and prepared 10 questions on said subject. I did TV & film, my daughter did Science (as she is a scientist!), my son did Food & Drink (as he is a chef!), Mum and Dad did History, my brother did music, and my nieces did general knowledge. It took almost 2 hours to do the whole quiz but it was such fun. We’ve already planned another one for this weekend – I’d better start researching my questions:))

The weather at the weekend wasn’t brilliant – still lots of showers but Monday morning dawned bright and sunny – just in time for the bars to open their terraces. From the photos posted on the local online newspaper, lots of people were taking advantage of our newfound freedom – keeping the 2m social distance of course.

So yesterday, was the long-awaited day when I could finally get my hair cut – it had been 14 weeks since my last cut – my fringe was touching my chin!! Both Andy and I were booked in with Theresa at A cut above in Estepona. Theresa has been our hairdresser for many years and we are now firm friends. It was Theresa’s birthday on Monday and she had decided to make herself her favourite coffee and walnut cake (as well as a great hairdresser, she’s also a great baker). I had made some more mince pies (Well, I had to use up the rest of the mincemeat:)) so we decided to trade cakes. I took some mince pies to her in exchange for a couple of slices of coffee and Walnut cake.

It was the first time we had been out in the car together for 9 weeks – I almost felt as if we were breaking the rules (we weren’t, I hasten to add!).

It was such an occasion, I needed to celebrate – I put on some makeup :))- something I hadn’t done since lockdown started! – I even painted my toenails and put on my sandals – up until now, I’d swapped between slippers and trainers! I felt as if I was emerging from my shell after so long shut indoors!

As always, Theresa did a great job on my hair…and yes, this time I will post a picture:)) 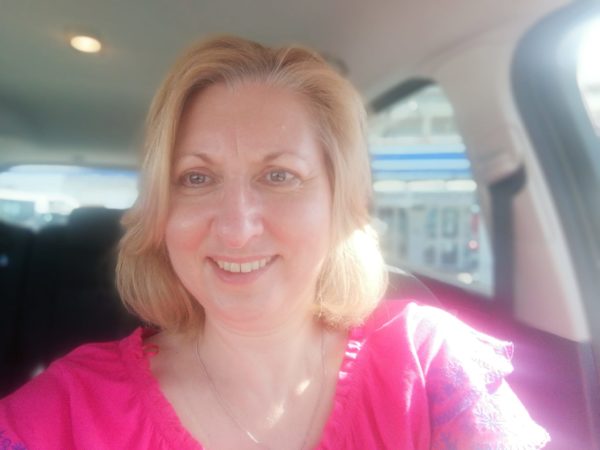 It felt sooooooo good. I don’t think I’ve ever had so much hair cut off in one time –  except maybe age 16, when I defied my mum and went from being able to sit on my hair to a shoulder-length cut!!

Talking of mum, she’s finished another jigsaw – although I don’t know how! This was a jigsaw that my brother had given mum to do. It’s called “What if – The Cake off”. The theory is “what if” the puzzle is different from the picture on the box – except my brother neglected to tell Mum that!! My brother is known in our family for his sarcastic remarks and practical jokes – Poor mum really fell for that one. This is what she thought she was making….. 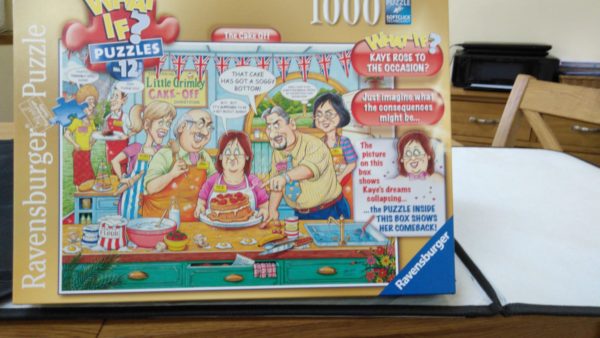 And this is what the puzzle ended up as!!

Welll done mum – I don’t think I’d have had the patience!!