This week, Spain started the Lockdown de-escalation. It will be done in phases. Most of Spain (apart from the worst hit regions of Madrid and Barcelona) moved into Phase 1 The numbers in Malaga province were still quite high so, unfortunately, Malaga also stayed in phase 0. Even though Manilva is right on the borders with Cadiz, we still come under Malaga (albeit, we are the “last” town!). It was disappointing – particularly as I already had an appointment booked with my hairdresser which I had to cancel (She is based in Estepona and, under phase 0, we cannot leave Manilva) – but better we are all safe!!

The weather has also taken a turn for the worse! We’ve had dull days with heavy showers for most of the week. This was our terrace on Wednesday evening

The sun did briefly make an appearance – I think it was on Tuesday – but it wasn’t for long:(. The temperatures have also taken a tumble. We even put the heating on one evening!!! Clothes wise, I’ve gone from Trackies, fleece and fluffy slippers, to shorts, T-shirt and flip flops, then back to trackies, fleece and fluffy slippers in the space of a week!!

Despite the weather, I have still managed to get out most days for my morning walk during my exercise time slot. Once again I have noticed several things around Manilva that I had never seen before. There is a mosaic in the pavement at the entrance to the village – it’s dated 2010, so it’s been there 10 years. I must have walked over it countless times but never really stopped to look at it. How bad is that?!! 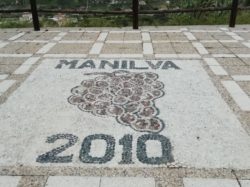 I also took a walk past the kid’s old primary school – I don’t think I’ve walked up there since the kids left the school so we are talking almost 10 years!! The school is called Pablo Picasso school and there are now some Picasso paintings on the exterior wall of the school. I’m not really into Picasso – or art in general if I’m honest but these really brighten up the street.

All the rain bought some guests to our front patio….

I’m trying new recipes and ideas for dinners. Shani makes a wonderful chickpea curry. I asked her for the recipe but she said she makes it so often that she just makes it “by eye and taste”. I did manage to get a brief outline of the recipe out of her so I thought I would give it a go

Well, let’s just say it was edible!! Andy said it “was ok but tasted nothing like Shani’s curry!” I think I’ll take that as a compliment (of sorts!). Shani has promised to make it for him when we can finally get together again – I think he is already looking forward to it:). There was a portion left so I asked Andy if he wanted it for his lunch the next day..and he politely said “no dear, you can have it” – Maybe he didn’t like it after all – oh well, you can’t win them all :)))

Mum has finished her final jigsaw…and is planning on ordering some more from amazon!. The charity shops will be overrun with Jigsaw puzzles once Lockdown is over I think! This one is called “The General Store”

We are now all eagerly awaiting the announcement at 7pm as to whether Malaga province can pass to phase 1 and I can finally get my hair cut!!