Christmas Traditions in Spain and Andalucia

When I first moved to Andalucia 17 years ago, the main thing I noticed about Christmas in Spain is that the preparations start much later here. There was not a bauble, Christmas tree or Santa in sight until the beginning of December – unlike the UK where they are on Christmas countdown since August! :)

This has changed slightly over the years and Christmas products now start appearing in the shops at the beginning of November. It will be a gradual thing but, by mid-December, Christmas has well and truly arrived!

Even after all these years, I still can’t get used to celebrating Christmas in 20º sunshine. To me, Christmas should be cold, with snow if you’ll lucky.

Christmas traditions vary throughout Spain depending on the region but let me tell you about some of the traditions and customs of an Andalucian Christmas.

The main constant throughout Andalucia, in fact, throughout Spain, is that Christmas is all about FAMILY. Spanish families tend to be large anyway but at Christmas, Grandmas, Grandpas, Brothers and Sisters, Aunts, Uncles, and cousins all gather together.

Christmas Eve, known as “Nochebuena” is the “main event” – much more so than Christmas Day. All the family will gather together for Christmas Eve dinner. The meal will last several hours with at least 3 courses.

The table will be filled with a large selection of dishes as starters where everyone helps themselves. Here are a few dishes that you can expect to find on most tables

Jamón –You will find a leg of Serrano ham (Jamon Serrano) in almost all households over Christmas. The shops will start taking orders way before Christmas. Those wanting to splash out will opt for a “Pata Negra” ham which is considered to be the very best ham in the world. It is served sliced very thinly. 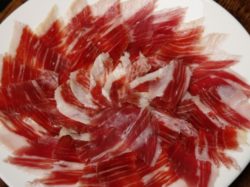 Grilled Prawns (Langostinos)– Another mainstay of the Christmas Eve table.  There is always a large queue at the fish counter in most supermarkets on the days leading up to Christmas Eve. It just wouldn’t do, not to have prawns on the table!! 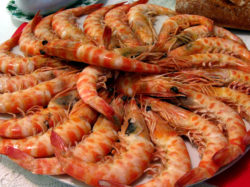 Stuffed Eggs (Huevos Relleños) – This is a simple yet delicious dish. Hard-boiled eggs are cut in half, the yolk removed and mixed with mayonnaise, tuna and red pepper, then stuffed back into the egg whites. 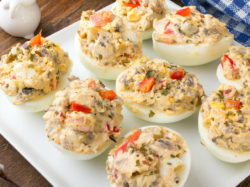 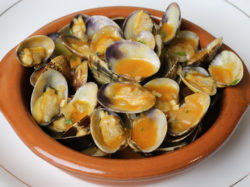 Selection of Cheeses (Quesos) No Christmas table would be complete without a cheeseboard and it the same here in Andalucia. Every family will have their preferences but you can be sure that Manchego Cheese (Queso Manchego) will be heavily featured.

Stewed meat and vegetables (Puchero) – A delicious stew made with vegetables, and a selection of meat. Once cooked, rice, noodles, or chickpeas can be added. Every “Grandma’s recipe” will differ slightly no doubt, but the base is the same. 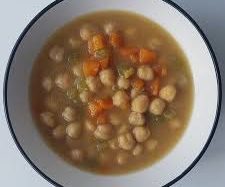 The Christmas Eve dinner main course is generally a roasted meat dish. The most traditional is either roast leg of lamb or roast shoulder of lamb. This is served with “patatas a lo pobre”. 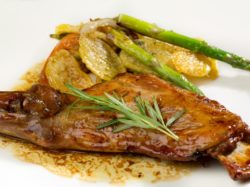 Patatas a lo Pobre is translated as “Poor man’s potatoes” but is actually rather delicious. It’s basically thinly sliced or cubed potatoes fried slowly in olive oil with onions and peppers. Some people also add other vegetables such as asparagus or green beans.

Another popular meat dish served as the main course is Sucking pig (Cochinillo). 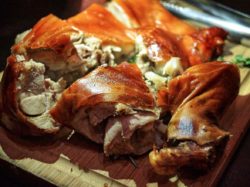 Generally, the dessert course is made up of a selection of sweets and cakes. As with the starters, it is all placed on the table and everyone helps themselves. Some of the most common are:-

Pestiños – Pestiños are a popular treat in Andalucia, especially at Christmas. They are small square-shaped pieces of sesame flavoured dough, with the two opposite corners folded over in the centre.  The dough is deep-fried in olive oil and then dipped in either sugar or honey. 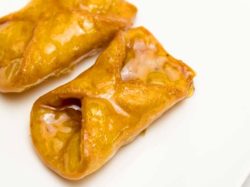 Rosquitos ( also known as Rosquillas) – These are doughnuts, traditionally served topped with sugar and cinnamon. 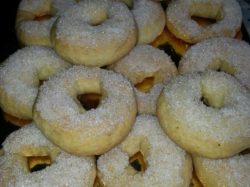 Polverones – Polverones will be found on every Christmas table. They are very crumbly, almond flavoured shortbreads. Polvo is Spanish for dust and you will find your fingers covered in white dust after eating them :) 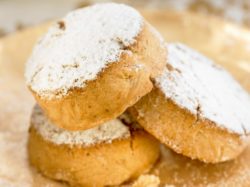 Turrón – Another firm favourite.  For me, the arrival of Turrón in the shops signals the countdown to Christmas. Basically, Turrón is similar to Nougat. Traditionally, Turrón is made with almonds or other nuts but now there are dozens of different varieties. Forget tins of Roses or Quality street – Christmas in Spain is all about Turrón. 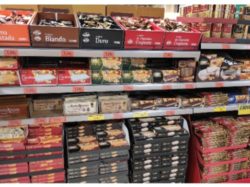 Christmas day in Andalucia is a much more laid back affair. The family will all gather together again – sometimes at a different person’s house to whoever hosted Christmas Eve. Lunch will be long – but that’s nothing unusual here in Spain :).  The meal will be similar to that of Christmas Eve but a different meat will be served. Over the years, turkey has also become popular in Spain and many households will have this as their Christmas Day meal.

After lunch, the family will all play games together.

Traditionally, no family presents are exchanged on Christmas Day – this is saved for Dìa de Los Reyes

The Dìa de Los Reyes Magos (The day of the Kings) falls on 6th January. This is another big family event. The traditional dessert (or in some cases, Breakfast) served on this day is a “Roscon de Reyes”. 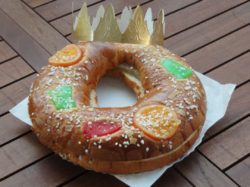 The Roscon de Reyes is a large ring-shaped cake decorated with icing and candied fruit and filled with either cream, custard, or in some places, chocolate. Buried inside the cake there are two “presents” – a small statue of one of the Three Kings and a bean. Finding the king is considered good luck and the lucky winner gets to wear the paper crown that normally comes with the cake. The person who finds the bean must pay for the cake!

When I first moved to Spain, you didn’t really see a Christmas tree but I think the influence of the “Brits” has taken effect and now many homes and businesses will put up a Christmas Tree.  Despite this, there is one decoration which will appear everywhere – The Belen.

The Belen depicts the Nativity scene in small statues and figures. They can vary in size from just the stable to a miniature version of the town of Bethlehem. The figures are collected and added to over the years and passed down through the generations.

In recent years, a new tradition has flourished – Belen Viviente – Living Belen. This is particularly common in the inland towns and villages. The townsfolk recreate the nativity scene in person. People flock from other nearby towns to see the spectacle.

Almost every town in Andalucia will put up Christmas lights and decorations, particularly on the town’s main roundabouts.

Probably, one of the best places to “see the lights” is Malaga city centre.  In fact, Malaga has been rated the number one place in Spain to see the Christmas Lights.

The big “switch on” always takes place on the final Friday in November. Calle Larios is the main shopping street where the biggest light displays are set up. Normally, there are sound and light shows at least three times each evening running from the Switch on date until 5th January but, due to Covid 19 restrictions, these shows will not take place this year. The lights, however, have been switched on and form a “winter forest”.

Traditionally, in Spain, the children’s gifts are bought by the Three Kings and not Father Christmas. This has changed in recent years and many children receive gifts on Christmas day as well as from the Kings.

In almost every town there will be a Three Kings Cavalcade on the evening of 5th January.  Several trucks will be elaborately decorated to form Christmas Floats (In the larger cities, there can be 20 or more floats). The floats will be accompanied by the local town band normally and several other characters on foot. The main float will carry the Three kings.

Like the Christmas lights, The Kings parades in the larger cities are a spectacle to behold with hundreds of people lining the streets. Traditionally, the Kings throw sweets into the crowd as the procession passes but this is now prohibited in many of the larger cities.

The final tradition I must mention is the El Gordo lottery draw. This is one of the richest lottery prizes in the world and is drawn on 22nd December. The price per ticket is 200€ but to make it more affordable for most people, each ticket is divided into 10 identical sub-tickets which cost 20€ each. Each sub ticket is known as a décimo (one-tenth). Each décimo is entitled to 10% of any prize that the ticket has won. Give it a go – you never know your luck!!  It is also a great time to contribute to charity.  A number of not-for-profit associations and charities sell sub-tickets or ‘decimos’ for 23 Euros – 3 of the euros go to that charity.

The Christmas lottery is made into a big event and is televised.  The Spanish holidays officially start when “Children of Luck” share out millions of hopes and dreams to everyone on the day of the draw. Young school children from the Colegio San Ildefonso sing out the numbers of each winning ball and show them to a panel of judges.  It is quite an emotional historical event as children take to the spotlight after months of practice.  Click here to find out more about the history of the lottery.